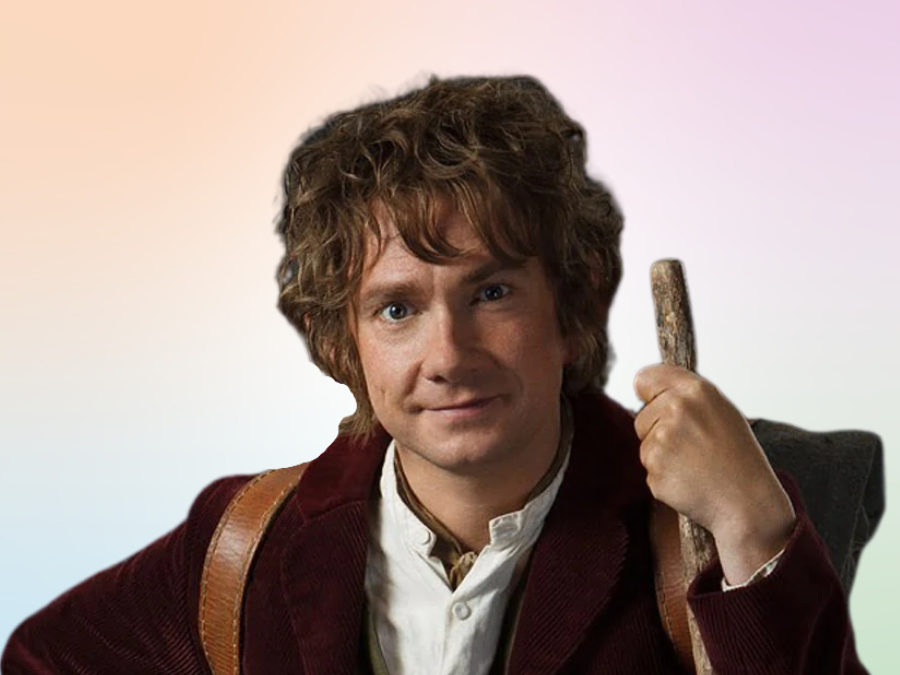 Gandalf suggested to Thorin that they hire Bilbo to be their burglar in the Quest of Erebor, and later fought in the Battle of Five Armies.

Bilbo was also one of the bearers of the One Ring, and the first to voluntarily give it up, with some difficulty. Because of his adventures, Bilbo was the first hobbit to become famous, and one of the few to set foot in the Undying Lands.

He wrote many of his journeys down in a book he called ‘There and Back Again’. Bilbo adopted his second-cousin-once-removed Frodo Baggins to be his heir.

Which personality type is Bilbo Baggins?

Bilbo Baggins is an ISFJ personality type. Caring and loyal, he has a strong sense of what is right and wrong. As an ISFJ, he has an unmatched sense of duty and can always be relied upon to keep his word.

Responsible and analytical, he approaches life from a practical perspective. ISFJs are skilled at reading a room and knowing unspoken social boundaries.

Bilbo is a sociable introvert. As an ISFJ he needs time to himself but people are the main focus of his life. Caring and thoughtful, he carefully considers how his actions impact others.

He values meaningful connections and he is deeply loyal. Despite being reserved in some ways, he isn’t afraid to stand up for underdogs if he feels that they are in need of support.

As an ISFJ personality type, Bilbo Baggins’s best matches are ESTP and ESFP.

Bilbo Baggins is a Virgo zodiac sign, which belongs to the Earth element of astrology, along with Taurus and Capricorn. The symbol of Virgo is the virgin, which represents purity.

As a Virgo zodiac sign, Bilbo is humble and affectionate. In addition to his ability to see the best in people, he is kind and always willing to help others. Even though he has achieved great success, you will rarely, if ever, find him showing off.

Which Enneagram type is Bilbo Baggins?

Bilbo Baggins is an Enneagram Six personality type with a Seven wing. Enneagram Sixes belong to the head centre, along with Fives and Sevens, and they naturally make decisions based on analysis.

Bilbo seeks to understand before he proceeds. Enneagram Sixes value connecting with others on an intellectual level and they like to feel in control.

As an Enneagram Six, Bilbo is courageous, observant and responsible. He has a knack for anticipating problems due to his analytical and strategic approach.

“It is no bad thing to celebrate a simple life.”

“It is sad, Frodo, how old alliances can be broken. How friendships between people can be lost. And for what?”

“I’m glad to have shared in your perils, Thorin. Each and every one of them. It is far more than any Baggins deserves.”