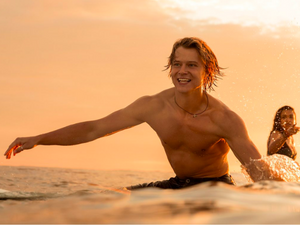 JJ is the loose cannon in ‘The Pogues’, the friendship group that includes JJ, John B, Pope Heyward, and Kiara Carrera. He’s the latest in a ‘long line of fishing, drinking, vendetta-holding salt-lifers who made their living off the water’. John B describes him as the ‘best surfer he knows’.

He is feisty and quick-tempered but he is also always up for a laugh and an adventure. He is sometimes a liability but is also brave and loyal to a fault.

JJ joins his friends as they follow clues and get into a few altercations in order to finally track down the gold from The Royal Merchant shipwreck.

Which personality type is JJ Maybank?

JJ Maybank is an ESTP personality type. Charismatic and fun, he has a bold presence that can be felt from a mile off. He is the ultimate ‘doer’.

Not one to sit around pondering life, he prefers to be out there exploring the world, going on adventure after adventure. Logical and original, ESTPs are the ultimate problem-solvers, particularly when it comes to practical matters.

JJ has an unmatched drive to succeed. As an ESTP, he is easily bored and he loves a challenge. JJ jumps headfirst into projects and works it out as he goes along.

There’s nothing more boring for an ESTP than sitting for hours reading a manual and they learn in a hands-on way. JJ lives in the moment and isn’t afraid to take a risk, which is typical of people of this personality type.

As an ESTP personality type, JJ Maybank’s best matches are ISFJ and ISTJ.

JJ Maybank is probably an Aries zodiac sign, which belongs to the Fire element of astrology, along with Leo and Sagittarius. The symbol of Aries is the ram, which represents an ability to always rise to the challenge.

As an Aries zodiac sign, JJ is loyal to his family and friends. People of this zodiac sign are typically active and assertive, which are traits that can cause them to be prone to arguments. JJ has a strong-headed nature and certainly isn’t afraid to say exactly what he thinks.

Which Enneagram type is JJ Maybank?

JJ Maybank is an Enneagram Seven personality type with an Eight wing. Enneagram Sevens belong to the head centre, along with Fives and Sixes, and they naturally make decisions based on analysis.

JJ seeks to understand before he proceeds. Enneagram Sevens value connecting with others on an intellectual level and they like to feel in control.

As an Enneagram Seven, JJ is versatile, curious and optimistic. He has an enthusiastic and forward-looking approach to life.

Enneagram Sevens are often generalists who have a variety of skills. It’s clear that JJ is resilient and able to overcome challenges. Fun-loving and lively, JJ tends to bounce from project to project.

“If I’m the one mediating, we’ve hit rock bottom.”