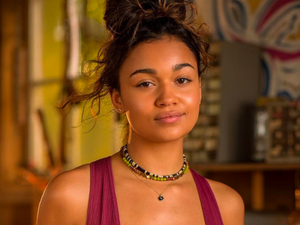 She is an athletic hippy chick with a socialist streak and, although she’d hate to admit it, she’s from a rich family meaning that she is technically a Kook. However, Kiara fits in perfectly into The Pogues, the friendship group that includes Kiara, JJ Maybank, John B and Pope Heyward.

She’s got a cutting sense of humor, a zen vibe, and a taste for adventure. John B, JJ, and Pope are all attracted to Kiara at some point. Despite a group-imposed “no Pogue-on-Pogue macking” rule, Kiara has a short-lived relationship with Pope before an amicable breakup.

Alongside the other Pogues, Kiara helps to find the gold from the Royal Merchant ship wreck.

Which personality type is Kiara Carrera?

Kiara Carrera is an ISFP personality type. She is sensual and creative, often thinking outside the box, particularly when it comes to artistic pursuits. As an ISFP, she has deeply-held values which guide her decisions in life.

She loves new experiences and would prefer to jump right in, instead of planning out every single detail. Kind and empathetic, she genuinely cares about the wellbeing of others.

Kiara has a quietly rebellious streak that can come as a surprise. Freedom is clearly important to her and she hates feeling controlled or tied down.

She has a carefree and go-with-the-flow attitude but ISFPs have a depth that they share with very few people. As an ISFP, she is able to live in the moment and she prefers to deal with tangible information rather than abstract theories.

As an ISFP personality type, Kiara Carrera’s best matches are ESTJ and ESFJ.

Kiara Carrera is probably a Taurus zodiac sign, which belongs to the Earth element of astrology, along with Virgo and Capricorn. The symbol of Taurus is the bull, which represents a bull-headed nature.

As a Taurus zodiac sign, Kiara is understanding because she always looks at situations from different perspectives. Typically Taureans closely observe people and this helps them understand the world around them. Kiara is a good listener and strives to appreciate different personalities.

Which Enneagram type is Kiara Carrera?

Kiara Carrera is an Enneagram Four personality type with a Three wing. Enneagram Fours belong to the heart centre, along with Threes and Twos, and they naturally make decisions based on their emotions.

She greatly values having a clear identity and purpose in life. In addition, Kiara is self-aware and honest but she can be moody on occasions.

As an Enneagram Four, Kiara is individualistic, sensitive and reflective. She approaches life from a unique angle and cares deeply about being authentic. Enneagram Fours have a strong desire to connect with people who understand their personality and motivations.

“It’s not a coincidence that your daughter’s sitting with us.”

“No Pogue on Pogue macking.”