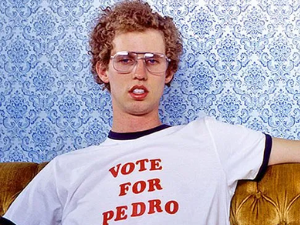 We explore Napoleon Dynamite’s personality type, best personality matches, zodiac sign and Enneagram type. Napoleon Dynamite is a fictional character who is a sixteen-year-old boy from the small town of Preston in Idaho. He lives at home with his grandmother, his big brother Kip and his Uncle Rico. At school, he befriends both Pedro Sanchez and Deb. Napoleon Dynamite is an awkward individual, which leads to him being outcast by his peers. At the school elections Pedro delivers a speech but believing he has lost, he walks away. To win back his friendship with Deb and to save Pedro’s presidential campaign, Napoleon performs a dance in front of the whole school at the end of the film.

Which personality type is Napoleon Dynamite?

Napoleon Dynamite is an INTP personality type. He is logical and tends to base his decisions on objective information rather than his feelings. As an INTP, Napoleon tends to be flexible and is good at thinking outside of the box. Visionary by nature, he usually thinks about the big picture rather than focusing on every tiny detail. INTPs typically like to keep their options open and feel limited by structure or planning.

Napoleon is quiet and thoughtful. As an INTP, he prefers to socialize with a small group of close friends, Pedro and Deb, with whom he shares common interests and can connect with on a deeper level. Typically INTPs love to discuss abstract theories and the physical world is less interesting to people of this personality type. Napoleon is highly intelligent and loves to solve problems of all kinds.

As an INTP personality type, Napoleon Dynamite’s best matches are ENFJ and ENTJ. On So Syncd, these personality matches are considered ‘golden pairs’ because they have just the right amount of similarities to understand each other and just the right amount of differences to create that spark. Read our blog post to learn more about INTP compatibility.

Napoleon Dynamite is probably an Aquarius zodiac sign, which belongs to the Air element of astrology, along with Gemini and Libra. The symbol of Aquarius is the water bearer, which represents pure intentions.

As an Aquarius zodiac sign, Napoleon is intellectual and cerebral. He often finds himself lost in thought while analyzing something or brainstorming solutions to problems. Visionary and forward-looking, Napoleon sees possibilities in everything and is open to other people’s points of view.

Which Enneagram type is Napoleon Dynamite?

Napoleon Dynamite is an Enneagram Four personality type with a Three wing. Enneagram Fours belong to the heart centre, along with Threes and Twos, and they naturally make decisions based on their emotions. He greatly values having a clear identity and purpose in life. In addition, Napoleon is self-aware and honest but he can be moody on occasions.

As an Enneagram Four, Napoleon is sensitive, imaginative and reserved. He values having a clear identity. Enneagram Fours have a strong desire to connect with people who truly understand them. Emotionally complex, Napoleon is individualistic and lives life according to his values.

“Tina, you fat lard! Come get some dinner! Tina, eat. Eat the food!”

“I see you’re drinking 1%. Is that ’cause you think you’re fat? Because you’re not. You could be drinking whole if you wanted to.”

“You know, like nunchuck skills, bo hunting skills, computer hacking skills. Girls only like guys who have great skills.”