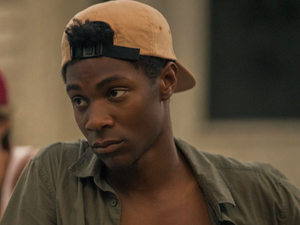 He is the smartest of The Pogues, the friendship group that includes Pope, JJ Maybank, John B, and Kiara Carrera.  He has a scholarship on the line which he views as his ticket to a life outside of the Outer Banks. John B describes Pope as ‘the brains of the operation’.

Although Pope is always up for an adventure with his friends, he is also the cautionary voice in the group. He is constantly thinking of possible consequences of their actions and warns the group when he feels that they are about to do something stupid.

His warnings, however, often fall on deaf ears. Pope’s father owns and runs Heywards, which provides seafood for the entire island.

Which personality type is Pope Heyward?

Pope Heyward is an ISTJ personality type. He is grounded and reserved by nature. Trustworthy and steady, Pope is the kind of person who stays true to his word.

ISTJs are dedicated to achieving their goals and they take their responsibilities seriously. Pope values structure in all areas of his life and he feels most comfortable in organizations that have a clear hierarchy.

Pope is faithful and honest. Integrity is hugely important to people of the ISTJ personality type. Pope is an extremely hard worker and he has the ability to stay focused in order to achieve his goals.

ISTJs don’t cut corners and they prefer to do things by the book, valuing rules and guidelines. Pope is relatively risk-averse and looks into details before making decisions or plans.

As an ISTJ personality type, Pope Heyward’s best matches are ESFP and ESTP.

Pope Heyward is probably a Capricorn zodiac sign, which belongs to the Earth element of astrology, along with Virgo and Capricorn. The symbol of Capricorn is the sea goat, which represents the ability to thrive in inhospitable environments.

As a Capricorn zodiac sign, Pope is conventional and values tradition, both when it comes to his career and personal life. In the big scheme of things, Pope is risk-averse and prefers to play it safe, valuing security and stability. With a strong sense of duty, Pope can be relied upon to follow through.

Which Enneagram type is Pope Heyward?

Pope Heyward is an Enneagram Six personality type with a Five wing. Enneagram Sixes belong to the head centre, along with Fives and Sevens, and they naturally make decisions based on analysis.

Pope seeks to understand before he proceeds. Enneagram Sixes value connecting with others on an intellectual level and they like to feel in control.

As an Enneagram Six, Pope is innovative, perceptive and responsible. He uses his strategic mind to foresee problems and he’s talented at coming up with solutions.

Enneagram Sixes are one of the most loyal personality types and they are known for being exceptionally dutiful. Trustworthy and committed, Pope expects the same in return from his loved ones.

“Love is 5 mins of pleasure for a lifetime of pain.”