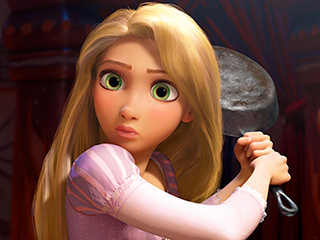 We explore Rapunzel’s personality type, best personality matches, zodiac sign and Enneagram type. Rapunzel is a fictional character from the movie Tangled and is the princess of the kingdom of Corona, known for her long, magical, golden hair.

As a child, Rapunzel was abducted by a wicked crone and locked away in a remote tower for eighteen years — during which, she became fascinated with a phenomenon involving “floating lights” that would only appear on her birthday.

With the aid of the handsome thief, Flynn Rider, Rapunzel escapes her tower to learn more about the lights and pursue her dream of exploring the outside world.

Rapunzel is one of the favorite Disney Princesses, alongside Snow White and Cinderella.

Which personality type is Rapunzel?

Rapunzel is an ENFP personality type. She is warm and outgoing, but she has a deeper side too that isn’t always obvious at first.

As an ENFP, Rapunzel is a unique mixture of being people-oriented but also introspective. Meaningful connections play a big part in her life and she is deeply loyal, which makes her a valued friend, colleague, and family member.

Rapunzel dislikes routine and prefers to focus on the future. Typically ENFPs are great at generating new ideas but they sometimes delay important tasks until the last minute.

Dreaming up original concepts but not seeing them through to the end is an issue that ENFPs like Rapunzel sometimes face. Rapunzel is certainly original and enthusiastic.

What are Rapunzel’s best personality matches?

As an ENFP personality type, Rapunzel’s best matches are INTJ and INFJ.

Rapunzel is a Pisces zodiac sign, which belongs to the Water element of astrology, along with Cancer and Scorpio. The symbol of Pisces is two fish swimming in different directions, which represents complexity.

As a Pisces zodiac sign, Rapunzel has an interest in spiritual and mystical realms. She is seen as quirky and otherworldly to some extent. With a tendency to overthink, people of the Pisces zodiac sign are naturally drawn to looking for deeper meanings behind anything and everything.

Which Enneagram type is Rapunzel?

Rapunzel is an Enneagram Seven personality type with a Six wing. Enneagram Sevens belong to the head centre, along with Fives and Sixes, and they naturally make decisions based on analysis.

Rapunzel seeks to understand before she proceeds. Enneagram Sevens value connecting with others on an intellectual level and they like to feel in control.

As an Enneagram Seven, Rapunzel is adaptable, curious and optimistic. She has an enthusiastic and forward-looking approach to life.

Enneagram Sevens are often generalists who are able to learn quickly and have a wide range of skills. Articulate and intelligent, Rapunzel comes across as well-read and resourceful.

“That’s the funny thing about birthdays, they’re kind of an annual thing.”

“I want to see the floating lights!”

“I have magic hair that glows when I sing.”