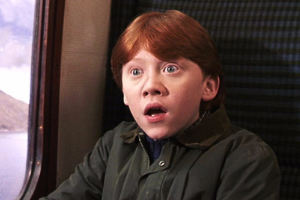 We explore Ron Weasley’s personality type, best personality matches, zodiac sign and Enneagram type. Ron Weasley is a fictional character from the Harry Potter series who is a pure-blood wizard who attended Hogwarts School and was Sorted into Gryffindor House. He became close friends with Harry Potter and Hermione Granger. He fought in numerous battles of the Second Wizarding War, including the Battles of the Department of Mysteries and the Astronomy Tower. Ron skipped his last year of school and accompanied Harry and Hermione on a hunt to destroy all of Lord Voldemort’s Horcruxes. He fought in the Battle of Hogwarts, during which he lost his brother Fred. Ron and Hermione eventually married and had two children.

Which personality type is Ron Weasley?

Ron Weasley is an ESFP personality type. He is warm and loves being in the spotlight. As an ESFP, he brings fun and spontaneity to people’s lives. People of the ESFP personality type are naturals at putting on a show and are always making their friends laugh. Preferring to work things out as he goes along rather than planning too far into the future, he is spontaneous and some may see him as impulsive.

As an ESFP, Ron is exceptionally observant of what is happening around him and he is able to notice even the smallest changes in people’s emotional states. As a result, ESFPs have exceptional social skills and they know how to work a room. Ron makes decisions based on his feelings and is passionate about causes that are close to his heart. When communicating, he is friendly and open.

As an ESFP personality type, Ron Weasley’s best matches are ISTJ and ISFJ. In fact, Hermione Granger is an ISTJ, so it’s no surprise that they have such great chemistry. On So Syncd, these personality matches are considered ‘golden pairs’ because they have just the right amount of similarities to understand each other and just the right amount of differences to create that spark. Read our blog post to learn more about ESFP compatibility.

Ron Weasley is a Pisces zodiac sign, which belongs to the Water element of astrology, along with Cancer and Scorpio. The symbol of Pisces is two fish swimming in different directions, which represents complexity.

As a Pisces zodiac sign, Ron is empathetic by nature. He naturally takes on the role of a listening ear and is highly in tune with the emotions of others. Typically people of the Pisces zodiac sign will immediately want to help if they see someone who is upset or in pain.

Which Enneagram type is Ron Weasley?

Ron Weasley is an Enneagram Six personality type with a Seven wing. Enneagram Sixes belong to the head centre, along with Fives and Sevens, and they naturally make decisions based on analysis. Ron seeks to understand before he proceeds. Enneagram Sixes value connecting with others on an intellectual level and they like to feel in control.

As an Enneagram Six, Ron is engaging, observant and responsible. He is able to anticipate problems that might occur far into the future. Enneagram Sixes are one of the most loyal personality types. Trustworthy and devoted, Ron fights for causes he feels strongly about and always defends loved ones when they are in need of support.

“Why spiders? Why couldn’t it be ‘follow the butterflies?'”

“If you want to kill Harry, you’ll have to kill us too!”