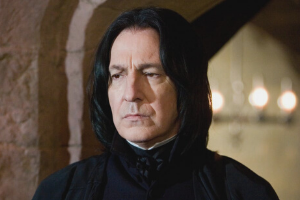 He was an English half-blood wizard who served as Potions Master, Head of Slytherin House, Defence Against the Dark Arts professor, and Headmaster of the Hogwarts School of Witchcraft and Wizardry and a Death Eater.

His double life played an extremely important role in both of the Wizarding Wars against Voldemort. Severus went to Hogwarts with Lily Potter, Harry Potter’s mother who he was in love with, but he was sorted into Slytherin House, the rival house to Lily’s.

Severus appears to be a villain throughout the series but in an unexpected twist at the end, it turns out that he is much nobler than expected.

Which personality type was Severus Snape?

Severus Snape was an INTJ personality type Interestingly, he was a unique mixture of being visionary and realistic. With a rare ability to remain focused for long periods of time, Snape was able to come up with a carefully thought our plan and then execute it accordingly.

As the ultimate masterminds, INTJs have a unique skill that enables them to run multiple future scenarios through their heads.

Severus was intelligent and tended to question the world around him. Typically, he preferred to make his own decisions about what made logical sense rather than following traditions for the sake of it.

Intellectual and original, Severus enjoyed taking about abstract concepts. As an INTJ, he had a broad knowledge base and was a natural problem-solver. When communicating, Severus was direct and preferred to get straight to the point.

As an INTJ personality type, Severus Snape’s best matches were ENFP and ENTP.

Severus Snape was a Capricorn zodiac sign, which belongs to the Earth element of astrology, along with Virgo and Capricorn. The symbol of Capricorn is the sea goat, which represents the ability to thrive in inhospitable environments.

As a Capricorn zodiac sign, Snape could be reserved when it came to expressing his feelings. However, deep down Capricorns are sensitive people. Snape was clear about what he believed in and people of the Capricorn zodiac sign aren’t afraid to stand up to bullies, which was definitely the case with Snape when he stood up to Lord Voldemort.

Which Enneagram type was Severus Snape?

Severus Snape was an Enneagram Six personality type with a Five wing. Enneagram Sixes belong to the head centre, along with Fives and Sevens, and they naturally make decisions based on analysis.

Snape looked to understand before he proceeded. Enneagram Sixes value connecting with others on an intellectual level and they like to feel in control.

As an Enneagram Six, Snape was engaging, observant and responsible. He was able to anticipate problems that might occur far into the future.

Enneagram Sixes are one of the most loyal personality types, which Snape showed when he kept his word to Lily to protect Harry for many years. Trustworthy and devoted, Snape fights for causes he feels strongly about and always defends loved ones when they are in need of support.

“That is the second time you have spoken out of turn, Miss Granger . . . Five more points from Gryffindor for being an insufferable know-it-all.”

“I have spied for you and lied for you, put myself in mortal danger for you. Everything was supposed to be to keep Lily Potter’s son safe. Now you tell me you have been raising him like a pig for slaughter.”

“I do not take cheek from anyone, Potter…not even ‘The Chosen One.”