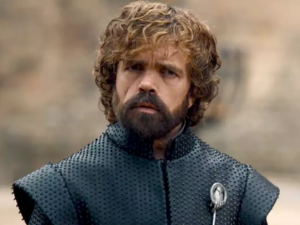 He is the youngest child of Lord Tywin Lannister and younger brother of Cersei and Jaime Lannister.

He uses his wit and intellect to overcome the prejudice he faces. He is the Lord of Casterly Rock and Hand of the King to Brandon Stark. Tyrion’s mother, Joanna Lannister, died giving birth to him, a tragedy which Tywin and Cersei unfairly blame Tyrion for.

While his two siblings occupied positions of power, Tyrion was put in charge of the sewers at Casterly Rock. Tyrion spent a lot of time at court in King’s Landing to avoid his father.

Which personality type is Tyrion Lannister?

Tyrion Lannister is an ENTP personality type. He loves to debate abstract matters with intelligent people. ENTPs enjoy digging deep into topics and are open-minded to new points of view.

They enjoy playing devil’s advocate because it enables them to refine their arguments. Tyrion is confident in sharing his opinions with others and he listens to what they have to say too.

Tyrion is naturally curious and has a knack for coming up with completely new ways of doing things. However, ENTPs tend to be ‘ideas people’ rather than the type who then goes on to work out the mechanics of how to implement something.

Tyrion is charismatic and people are drawn to his confidence. People of this personality type can are usually direct in the way that they communicate.

As an ENTP personality type, Tyrion Lannister’s best matches are INFJ and INTJ.

Tyrion Lannister is probably a Sagittarius zodiac sign, which belongs to the Fire element of astrology, along with Aries and Leo. The symbol of Sagittarius is an archer pointing his bow to the sky, which represents freedom and liberation.

As a Sagittarius, Tyrion has a warm and welcoming nature. However, he can be unpredictable due to his curious and adventurous nature. People of the Sagittarius zodiac sign are known for changing their mind and points of view without any kind of warning.

Which Enneagram type is Tyrion Lannister?

Tyrion Lannister is an Enneagram Seven personality type with a Six wing. Enneagram Sevens belong to the head centre, along with Fives and Sixes, and they naturally make decisions based on analysis.

Tyrion seeks to understand before he proceeds. Enneagram Sevens value connecting with others on an intellectual level and they like to feel in control.

As an Enneagram Seven, Tyrion is adaptable and curious. However, he takes these traits to the extreme and can be impulsive. Unhealthy Enneagram Sevens can be self-centred and hedonistic, which can be seen with Tyrion. Easily bored, Tyrion tends to jump from one project to another before finishing what he started.

“I try to know as many people as I can. You never know which one you’ll need.”

“Next time I have an idea like that, punch me in the face.”

“Let me give you some advice. Never forget what you are. The rest of the world will not. Wear it like armor, and it can never be used to hurt you.”