ESTP personality type in a nutshell

ESTPs have an abundance of charisma, a strong presence and they’re always willing to take a risk. Comfortable in the spotlight, ESTPs certainly know how to entertain. The phrase ‘rules are made to be broken’ was made for people of the ESTP personality type and they don’t take well to organized environments.

ESTPs are doers. They find theoretical concepts boring, much preferring to just go out into the world and try things as quickly as possible. Happy to learn by making mistakes, people of the ESTP personality type are quick to bounce back and move on to the next exciting adventure.

“Life is either a daring adventure or nothing at all.”

Action encompasses the meaning of being an ESTP and they often take it upon themselves to keep things interesting. Whether it’s being the life and soul of the party or setting a new record, ESTPs will go out of their way to add a little spice. One thing’s for sure, life will never be boring with an ESTP around.

When it comes to relationships, ESTPs are in no rush to commit. They value variety, and this applies to dating as well. This personality type lives in the moment and making plans far in advance doesn’t come naturally to them. When they do find that person who makes them want to commit, they’ll usually keep things fun and action-packed. 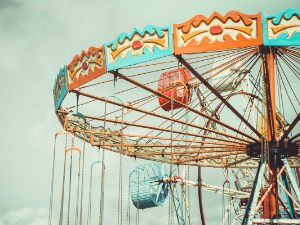 Ride the dodgems, whirl on the big wheel and share candy floss at a theme park date.

ESTPs are bold and energetic with a real excitement for exploring.

ESTPs keenly observe what’s going on around them and react accordingly.

ESTPs say it how it is and they naturally communicate in a clear manner.

ESTPs are highly rational and have a talent for cutting through the noise.

ESTPs sometimes lack empathy and awareness of how others are feeling.

ESTPs can rush into situations before thinking and working out a plan.

ESTPs don’t like to show their feelings too quickly or give too much away.

ESTPs aren’t ones to agree with “good things come to those who wait”.

The meaning of ESTP

So what is the meaning of ESTP? ESTP is one of the 16 personality types. ESTP stands for Extroversion, Sensing, Thinking and Perceiving. Each letter represents certain personality characteristics:

At So Syncd, we call ESTPs ‘So Adventurous’ because they are daring and love to explore. They are also known as The Entrepreneur, The Promoter and The Ultimate Realist.

As natural thrill-seekers, ESTPs are comfortable taking risks, both physically and financially. They are often drawn to extreme sports that get their adrenaline pumping. You’ll usually find them living in the moment and they aren’t ones to plan too far into the future, preferring to work things out as they go along.

ESTPs are quick to jump into action. Logical and practical, they are some of the best people to have around in a crisis because they have a unique ability to remain calm. Plus, they’re talented at coming up with practical solutions. ESTPs are highly observant of what’s going on around them and they pick up on small changes in body language.

Freedom is important to people of the ESTP personality type and they can’t stand feeling tied down. Adaptable and action-oriented, they can struggle in highly structured environments that require them to follow a routine. ESTPs like to decide how to live their lives and they’re not afraid to break the rules.

ESTPs are rational and passionate individuals. With a special kind of charisma, they have a dominant energy and they are comfortable taking the lead in all kinds of situations. They’re not your conventional leaders though. With a high-risk appetite, they steer the boat towards adventure and excitement.

The paradox of the ESTP

ESTPs are decisive but they can be flighty. They are quick to digest information and make decisions. If there’s one thing ESTPs can’t stand, it’s hanging around doing nothing which is why they like to decide their course of action sooner rather than later. Once an ESTP has decided to do something, there’s no stopping them.

At the same time, ESTPs can be flighty. They are quick to make decisions but they are also quick to change their mind. Highly adaptable, ESTPs aren’t the type to be stuck in their ways and closed to new ways of doing things. If there’s new information that leads them to a logical conclusion of taking a different path, ESTPs don’t hesitate to pursue it.

Female ESTPs are unique individuals who know how to have fun. They are dynamic people who take a logical approach to life and love being around friends. There’s never a dull moment when a female ESTP is around and they seek adventure wherever they go. In general, female ESTPs don’t fit society’s feminine stereotypes but they tend to be popular because of their confidence and charm.

Male ESTPs have a dominant and adventurous. They have a strong drive to succeed in life and they go after what they want. With their action-oriented nature, they are masters at making things happen. Male ESTPs like to keep life exciting and they trust their ability to figure things. However, male ESTPs can struggle when it comes to dealing with emotions.

Find meaningful connections as an ESTP