INTJ personality type in a nutshell

INTJs are the ultimate strategists who view life almost like a chess game, carefully considering the risk-reward profile of each and every decision. People of the INTJ personality type are both logical and innovative. As natural problem-solvers, there’s nothing they love more than making a system more efficient through an original solution.

INTJs can be seen as pessimistic but it’s not that they try to look for the bad. It’s just that they have a unique ability to foresee long-term future outcomes and therefore predict hurdles further down the line that most others aren’t able to anticipate. However, when an INTJ does decide that a goal is worth pursuing, they’ll work tirelessly to achieve it with laser focus.

“It’s better to be alone than in bad company.”

INTJs seek to learn, usually as a stepping stone to achieving a goal. They tend to be confident in their intellectual abilities which makes sense given they are usually highly intelligent. As natural sceptics, INTJs are quick to question the world around them, preferring to come to their own conclusions through careful analysis. They can be uncomfortable when it comes to emotions due to their irrational nature.

When it comes to relationships, INTJs often have clearly defined criteria for potential partners but the planned approach that works so well in most other areas of their lives is often less applicable when it comes to dating. People of the INTJ personality type rarely meet people that they truly connect with, but once they do find that someone, they will be deeply loyal and devoted partners.

INTJs are most compatible with partners who are spontaneous and easy-going to balance out their need for structure. So which types are the best matches for an INTJ? ENFPs and ENTPs are the best personality matches for INTJs. You can read our complete guide to INTJ compatibility to learn more. 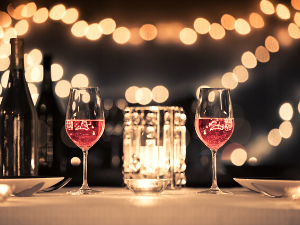 A table set for two to enjoy fabulous food and a fun night at a candlelit dinner.

INTJs will be completely committed if they think something is worth their while.

INTJs are intellectually creative and like to challenge the status quo.

INTJs have a natural curiosity and love to learn about different topics.

INTJs are talented at coming up with effective plans to achieve their goals.

INTJs can be quick to judge and they lack patience in certain situations.

INTJs sometimes disregard other people’s emotions and can lack subtlety.

INTJs can be certain they are right and reject other people’s opinions.

INTJs can be dismissive, especially if they see people as unintelligent.

The meaning of INTJ

So what is the meaning of INTJ? INTJ is one of the 16 personality types. INTJ stands for Introversion, iNtuition, Thinking and Judging. Each letter represents certain personality characteristics:

At So Syncd, we call INTJs ‘So Strategic’ because they are able to see and plan far into the future. They are also known as The Architect, The Mastermind and The Conceptual Planner.

INTJs are unconventional and they question everything. They place little importance on tradition, unless they see logic behind it, and they don’t tend to make a fuss about birthdays and anniversaries. Fortunately, INTJs aren’t overly concerned about what others think of them and they’re not afraid to let their opinions be know, particularly if someone is spreading false information and they want to set the record straight.

INTJs are highly independent and are often seen as a lone wolf. They prefer not having to rely on others and, as introverts, they’ll happily spend lengthy amounts of time by themselves. In fact, this is refreshing and enjoyable for people of the INTJ personality type. With a natural curiosity, they can often be found learning something new and they take personal development seriously.

INTJs value efficiency, often optimizing even the smallest of daily tasks. They don’t have time for people who take too long to get to the point and even people walking slowly in the street can be frustrating for people of the INTJ personality type. Essentially, INTJs don’t like to waste time.

Honesty is important to people of the INTJ personality type. Having a direct communication style, they don’t see the point in playing games and they’d rather just say it how it is. Plus, they dislike gossip. They’re aware if someone is gossiping to them, there’s a good chance they’ll be gossiping about them too.

The paradox of the INTJ

INTJs are pragmatic yet idealistic. They have a visionary side to them which combines their ability to see far into the future with their imagination. However, with their foresight also comes the ability to predict problems. As a result, INTJs are one of the most risk-averse personality types.

INTJs are certainly able to dream big but whether they want to pursue those goals is another story. They can be described as ‘pessimistic optimists’. Being the ultimate masterminds, they’ll spend a significant amount of time weighing up the pros and cons before coming to a decision.

As one of the rarest personality types for women, female INTJs can often feel out of place. They tend to have traits that aren’t stereotypically feminine and it takes them a long time to open up. Some people are intimidated by their no-nonsense attitude. However, the right person will deeply appreciate these characteristics of female INTJs.

Male INTJs dislike drama and they’ll usually try to avoid overly emotional people. With their rational way of approaching life, they can see excessive displays of emotion as a waste of time or view them as a cry for attention, which can be irritating for people of the INTJ personality type. Male INTJs prefer to solve problems through logic and careful analysis.

Find meaningful connections as an INTJ