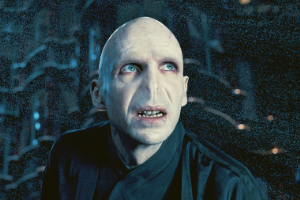 He was a half-blood wizard considered to have been the most powerful and dangerous Dark Wizard of all time. Voldemort attended Hogwarts School of Witchcraft and Wizardry and was sorted into Slytherin house.

He split his own spirit into a total of eight fragments, creating seven Horcruxes, one unintentionally and without his knowledge was Harry Potter. Voldemort commanded an army of wizards and Dark creatures to commit countless murders and atrocities.

He was finally killed by his own backfiring curse after Albus Dumbledore and Harry Potter destroyed all of his Horcruxes.

Which personality type was Lord Voldemort?

Lord Voldemort was an unhealthy ENTJ personality type. He was determined to get what he wanted and would step over anyone who got in his way. Healthy ENTJs aim to achieve their goals in an ethical way, but for unhealthy ENTJs, morals go out of the window. Voldemort was controlling and bossy, using people as pawns with no regard for them as humans or their emotions.

Voldemort was manipulative and forced people to listen to his opinions. Healthy ENTJs are able to read a room, but as an unhealthy ENTJ, Voldemort lacked self-awareness. He came across as domineering and aggressive. Voldemort was unforgiving and dismissed emotions, be it his own or other people’s. Lacking tact, he was overly direct, often upsetting those he comes into contact with.

As an ENTJ personality type, Lord Voldemort’s best matches were INFP and INTP. On So Syncd, these personality matches are considered ‘golden pairs’ because they have just the right amount of similarities to understand each other and just the right amount of differences to create that spark. Read our blog post to learn more about ENTJ compatibility.

Lord Voldemort was an unhealthy Capricorn zodiac sign. Capricorn belongs to the Earth element of astrology, along with Virgo and Capricorn. The symbol of Capricorn is the sea goat, which represents the ability to thrive in inhospitable environments.

Which Enneagram type was Lord Voldemort?

Lord Voldemort was an unhealthy Enneagram Three with a Four wing. Enneagram Threes belong to the heart centre, along with Twos and Fours, and they naturally make decisions based on their emotions. He greatly valued connections with others and mutual support. In addition, Voldemort likes to feel appreciated and recognition was key to his happiness.

“There is no good and evil, there is only power and those too weak to seek it.”

“Pick up your wand, Potter! You’ve been taught how to duel, I presume. First, we bow to each other… Dumbledore wouldn’t want you to forget your manners, would he?”