INFP personality type in a nutshell

INFPs are creative and complex individuals who have a calming presence. They’re adaptable and easy-going most of the time, but when a strongly-held value is challenged, they will fight tooth and nail for what they believe in. Authenticity is essential to INFPs and they feel little pressure to conform to social norms.

Superficial and fake people are an instant turn-off for the INFP personality type. INFPs are constantly looking for deeper meanings instead of simply noticing what’s on the surface. INFPs have vivid imaginations and they can get completely caught up in their thoughts.

“In the long run, the sharpest weapon of all is a kind and gentle spirit.”

For an INFP, their mind is a limitless playground for them to explore exciting possibilities. They can often be found daydreaming and imagining detailed scenarios in their heads. Even people who have been friends with INFPs for years might not know the extent of their wild imagination. INFPs tend to be private though, more so than you’d expect, and they share their deepest thoughts only with people that they truly trust.

With a need for deep connections that go far beyond the surface, INFPs take relationships seriously and they don’t tend to find casual flings fulfilling. Attraction is based on much more than just looks for the INFP personality type but they rarely meet people with whom they feel a strong connection. 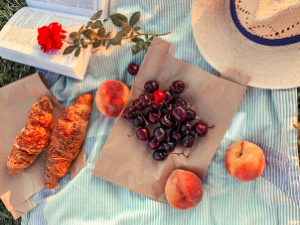 A stroll through a long grassy field and a picnic under a shady tree with a bottle of fizz.

INFPs are empathetic, often feeling other people’s emotions as if they were their own.

INFPs have a strong in-built sense of what is right and wrong and they stick to their values.

As long as their principals aren’t challenged, INFPs are accepting of other people’s opinions.

INFPs are skilled at thinking outside the box and they are highly imaginative.

INFPs can be sensitive to criticism, even when it’s coming from a good place.

INFPs have a tendency to overanalyze situations because they think so deeply.

Day-to-day practical matters such as eating balanced meals can fall by the wayside for INFPs.

The idealistic nature of INFPs can be taken too far, resulting in unrealistic visions.

The meaning of INFP

So what is the meaning of INFP? INFP is one of the 16 personality types. INFP stands for Introversion, iNtuition, Feeling and Perceiving. Each letter represents certain personality characteristics:

At So Syncd, we call INFPs ‘So Unique’ because they are a rare mixture of being individualistic and principled. They are also known as The Mediator, The Healer and The Idealist.

INFPs have unique personality characteristics and they’re often misunderstood. Firstly, they are open-minded and non-judgmental which means that they appreciate that different paths work for different personalities. Empathy and understanding come naturally to these sensitive souls who often feel other people’s emotions as if they are their own.

INFPs have an individualistic and quietly rebellious streak which can come as a surprise to people who don’t know them well. They march to the beat of their own drum and they won’t follow tradition for tradition’s sake. Living a life in alignment with their values isn’t an option for INFPs, it’s essential.

INFPs have a strong desire to have a purpose in life. They are one of the personality types who are most in tune with their personal values and they need to know that whatever they are doing is aligned with what they believe in.

Caring and empathetic, INFPs long to help others and to make the world a better place. They’ll often look out for the underdog. INFPs are a unique mix of being highly in touch with their own emotions and also wanting to understand others on a deep level. A lot of INFPs take an interest in psychology and personality types in order to better understand the human mind.

The paradox of the INFP

INFPs are gentle but fierce. With a peaceful and unassuming demeanour, it’s easy to underestimate INFPs. But they have a rich and passionate inner world that they share with very few people, if any, and they’re not afraid to stand up for causes they believe in.

INFPs are clear about their morals and values in life. If they see something happening that doesn’t feel ‘right’, they’ll speak up if they feel strongly about it. Whether it’s campaigning for a cause close to their heart or standing up to someone who they see treating others unfairly, INFPs will let their opinions be known when it’s necessary.

Female INFPs tend to feel like they don’t quite fit in. Through their social skills and empathy, they are acutely aware of how differently they think compared to a lot of other people and they can be quite awkward at times. Despite feeling everything so deeply, female INFPs can come across as aloof and unemotional as they tend to keep their emotions to themselves.

Being sensitive and gentle, male INFPs often feel particularly misunderstood as their personality characteristics go against the stereotypical masculine traits of today’s society. Male INFPs might try to repress their deep emotions which can have negative consequences. INFP men who are encouraged to accept and embrace their unique personality traits end up being empathetic, open-minded and brave.

Find meaningful connections as an INFP