ISTP personality type in a nutshell

ISTPs are the coolest of the cool and they take life as it comes. Easy-going and straightforward, ISTPs see little point in overthinking or worrying about situations that can’t be changed, so quite simply they don’t.

Give an ISTP a problem and they’ll come up with a solution. They’re masters at figuring things out, especially when it comes to practical matters. ISTPs learn best by trial-and-error and enjoy pulling things apart to see how they work. Using tools and machines comes naturally to people of the ISTP personality type.

“If you obey all the rules, you miss all the fun.”

They have a calm demeanor, but they also have a spontaneous side that can surprise people. In some situations, ISTPs are outright impulsive. Being private and not giving much away, they can be difficult to read and figure out. However, many people are attracted to their quiet confidence and understated boldness.

ISTPs apply the same logic they use in other areas of their lives to their relationships. If someone doesn’t like them back, they’ll accept it and move on rather than spend countless hours dwelling on it. ISTPs value their freedom and can find the irrational nature of emotions overwhelming, which can sometimes cause challenges in relationships.

ISTPs are most compatible with partners who are decisive and supportive. So which types are the best matches for an ISTP? ESFJs and ESTJs are the best personality matches for ISTPs. You can read our complete guide to ISTP compatibility to learn more. 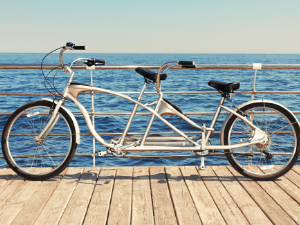 Test your teamwork skills and your balancing act on a bicycle made for two.

ISTPs aren’t phased by practical problems and can work through them logically.

ISTPs are flexible and open-minded which makes them easy to be around.

ISTPs manage to breeze through life without overly worrying or stressing.

ISTPs are able to work with what they’ve got to solve most problems.

ISTPs take things as they come and shy away from long-term commitments.

ISTPs sometimes lack empathy and awareness of other people’s feelings.

ISTPs don’t give much away until, particularly when it comes to their feelings.

ISTPs have a low boredom threshold and need to be entertained.

The meaning of ISTP

So what is the meaning of ISTP? ISTP is one of the 16 personality types. ISTP stands for Introversion, Sensing, Thinking and Perceiving. Each letter represents certain personality characteristics:

At So Syncd, we call ISTPs ‘So Practical’ because they are hands-on and talented at solving problems. They are also known as The Entertainer, The Performer and The Motivator Presenter.

Easily bored, ISTPs are drawn to new experiences and adventures. Always keen to keep life interesting, they love the thrill of an adrenaline rush and they aren’t afraid to take physical risks. Fortunately, they have a talent for responding to new information which makes them skilled at navigating risky situations.

Observant and highly aware of their surroundings, ISTPs noticed small details that pass others by. They are able to keep their calm and this encompasses the meaning of being an ISTP. They can be extremely helpful to have around in an emergency situation because their ability to remain level-headed mixed with their logic means that they are able to approach the situation objectively.

Led by logic rather than emotions, ISTPs are some of the most rational people out there. However, ISTPs can find it difficult to understand emotions, be it their own or other people’s, because of their irrational nature. As a result, people of the ISTP personality type can struggle to read people.

ISTPs value freedom. They are independent and need their own space. Feeling tied down is a nightmare scenario for an ISTP. They do value human connection but, as introverts, they recharge when alone and too much socializing is draining for people of the ISTP personality type. In all areas of their life, they don’t like to be controlled.

The paradox of the ISTP

ISTPS are easy-going but inflexible. People of the ISTP personality type don’t sweat the small things. If it’s something like deciding where to go for dinner or working out what to do on the weekend, ISTPs are happy to go with the flow and let someone else take the reins when it comes to organizing.

However, ISTPs can be stubborn and inflexible about certain topics. ISTPs place a lot of importance on the truth and they have strongly held principles. If they catch someone spreading false information or trying to persuade them to do something they don’t want to do, ISTPs will hold their ground.

Female ISTPs are rare and they often feel like they don’t fit in. When they’re younger, they don’t tend to enjoy stereotypically feminine behaviours such as going shopping and playing around with make-up. With a rebellious streak, female ISTPs have a wild side and they aren’t afraid to break the rules. They can be impulsive at times.

Male ISTPs are quietly confident and they stick to the facts. They are direct in the way they communicate. With an enigmatic charm, male ISTPs are often seen as attractive and people love to try and figure them out. Male ISTPs don’t tend to care about what people think of them and they are generally relaxed people who know how to have fun.

Find meaningful connections as an ISTP