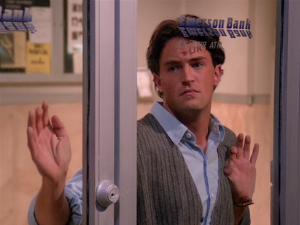 He is the son of Charles and Nora Bing. Quick-witter and notoriously sarcastic, Chandler has a great sense of humour. He claims his sarcasm is a defense mechanism he developed due to his parents’ divorcing when he was a child.

Chandler’s best friends are Joey Tribbiani, who he lives with, and Ross Geller, who was his college roommate. He met Ross’ sister and his future wife, Monica Geller, and her friend, Rachel Green, while celebrating Thanksgiving at Ross’ parents’ house.

He met Phoebe Buffay, the sixth member of the Friends clan, through Monica.

Which personality type is Chandler Bing?

Chandler Bing is an ENTP personality type. He loves a good debate with anyone who can match him intellectually. ENTPs enjoy picking apart arguments and they are known for playing devil’s advocate.

This is for two reasons: it gives them the opportunity to show off their quick wit and it also helps them to clarify their thoughts. Chandler is certainly one to openly speak his mind and share his opinions.

Chandler loves to learn and is talented at thinking up innovative ideas. However, ENTPs tend to focus on the big picture rather than get bogged down in the details of how something will actually work in practice.

With his confidence and decisiveness, Chandler is a great conversationalist who is never short of things to say. He doesn’t care much for tradition and prefers to play by his own rules.

As an ENTP personality type, Chandler Bing’s best matches are INFJ and INTJ.

Chandler Bing is an Aries zodiac sign, which belongs to the Fire element of astrology, along with Leo and Sagittarius. The symbol of Aries is the ram, which represents an ability to always rise to the challenge.

As an Aries zodiac sign, Chandler is loyal to his family and friends. People of this zodiac sign are typically active and assertive, which are traits that can cause them to be prone to arguments. Chandler has a strong-headed nature and certainly isn’t afraid to say exactly what he thinks.

Which Enneagram type is Chandler Bing?

Chandler Bing is an Enneagram Six personality type with a Seven wing. Enneagram Sixes belong to the head centre, along with Fives and Sevens, and they naturally make decisions based on analysis.

Chandler seeks to understand before he proceeds. Enneagram Sixes value connecting with others on an intellectual level and they like to feel in control.

As an Enneagram Six, Chandler is innovative, perceptive and responsible. He has a special talent for foreseeing problems due to his strategic nature.

“You have to stop the q-tip when there’s resistance!”

“I’m not great at the advice. Can I interest you in a sarcastic comment?”

“I’m a gym member. I try to go four times a week, but I’ve missed the last twelve hundred times.”