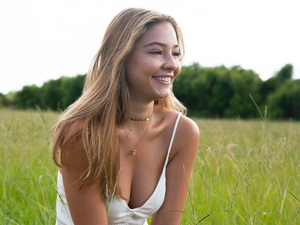 She is the vivacious queen bee of the Outer Banks, alongside her golden-boy ex-boyfriend Topper. Sarah has an older brother, Rafe Cameron, and a younger sister, Wheezie.

She lives with her father, Ward, and her stepmother, Rose, with whom she has a relatively strained relationship.

Sarah comes from the Kook world and is frequently scorned by The Pogues for her reputation as a princess but there is more to her than meets the eye.

She is quick-witted and warm-hearted and, despite the odds, she catches the eye of John B and becomes involved in an unforgettable adventure.

Which personality type is Sarah Cameron?

Sarah Cameron is an ESFP personality type. She is full of energy and is comfortable in the spotlight. As an ESFP, she brings fun and spontaneity to all kinds of situations.

A natural performer, she enjoys putting on a show so it’s no surprise that she’s an ESFP. Preferring to play things by ear rather than planning in advance, she can’t stand feeling controlled or restricted.

As an ESFP, Sarah is exceptionally observant of her environment and she is able to notice subtle changes in social situations. Partly as a result of this, ESFPs have strong social skills and they know how to charm people.

Sarah makes decisions based on her personal values and is passionate about certain causes. When communicating, she is warm and accepting.

As an ESFP personality type, Sarah Cameron’s best matches are ISTJ and ISFJ.

Sarah Cameron is probably a Gemini zodiac sign, which belongs to the Air element of astrology, along with Aquarius and Libra. The symbol of Gemini is the twins, which represents a dual-natured personality.

As a Gemini zodiac sign, Sarah is enthusiastic and social. She’s the life and soul of the party. Typically Geminis always have interesting stories to tell and you’re unlikely to end up having boring conversations with people of this zodiac sign. Sarah appears to be comfortable talking to people who she doesn’t know well.

Which Enneagram type is Sarah Cameron?

Sarah Cameron is an Enneagram Seven personality type with a Six wing. Enneagram Sevens belong to the head centre, along with Fives and Sixes, and they naturally make decisions based on analysis.

Sarah seeks to understand before she proceeds. Enneagram Sevens value connecting with others on an intellectual level and they like to feel in control.

As an Enneagram Seven, Sarah is adaptable, curious and optimistic. She has an enthusiastic and forward-looking approach to life.

Enneagram Sevens are often generalists who are able to learn quickly and have a wide range of skills. Articulate and intelligent, Sarah comes across as well-read and resourceful.

“The North star. It’s the only star that doesn’t move. Everything else spins around that.”

“When people get close to me, I feel trapped. And I bail and I blame them for it.”

“Now that we have returned to the motherland, we must revert to our real identities.”