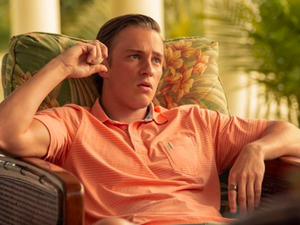 Rafe is the eldest son of Ward Cameron and the older brother of Sarah Cameron and Wheezie. Rafe was supposed to be next in line to inherit the Cameron business.

This plan failed when Rafe dropped out of college and started down a much darker path in life. He became addicted to drugs, specifically cocaine, and dealt cocaine to the fellow Kooks.

He has a strained relationship with his father and is disrespectful and leering towards his sisters and friends. Rafe gets into trouble with Barry, the town drug dealer, and he owes him a lot of money.

Which personality type is Rafe Cameron?

Rafe Cameron is an unhealthy ESTP. He is impulsive, thrill-seeking and indulges in all kinds of sensory pleasures. Rafe feels alive in high-risk situations and often does things for attention.

Healthy ESTPs are entertaining and charming but unhealthy ESTPs can lack self-awareness. Rafe could also be described as cold and he clearly lacks empathy.

Rafe is manipulative and uses people as pawns to get what he wants. He is actively aggressive towards people and he finds it difficult to contain his emotions.

Clearly insecure, Rafe can’t handle criticism of any kind and becomes defensive when there is anything negative said about him. Rafe clearly thinks that he is right about everything and hates people challenging his opinions.

As an ESTP personality type, Rafe Cameron’s best matches are ISFJ and ISTJ.

Rafe Cameron is probably an unhealthy Aries zodiac sign. Aries belongs to the Fire element of astrology, along with Leo and Sagittarius. The symbol of Aries is the ram, which represents an ability to always rise to the challenge.

As an Aries zodiac sign, Rafe is passionate and can be fiery at times. He has a temper that is difficult to control in certain situations and this can be taken to extreme levels. This is typical of people of the Aries zodiac sign who are known for not being able to control their emotions.

Which Enneagram type is Rafe Cameron?

Rafe Cameron is an unhealthy Enneagram Six personality type with a Seven wing. Enneagram Sixes belong to the head centre, along with Fives and Sevens, and they naturally make decisions based on analysis.

Rafe seeks to understand before he proceeds. Enneagram Fives value connecting with others on an intellectual level and they like to feel in control.

As an Enneagram Six, Rafe is able to foresee problems. However, he takes these traits to the extreme and is highly reactive to any potential challenges.

Plus, he can be anxious at times, seeing danger everywhere. Unhealthy Enneagram Sixes are typically highly defensive, always looking for threats to their own stability and security.

“Everybody thinks nature is all chill, right … Everything is trying to kill everything else all the time and every single thing has to kill to live. Killing is nature.”

“I know I can’t change the past, but I’m gonna be different now”.