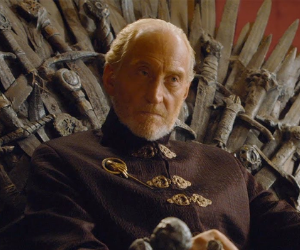 He was the ruthless patriarch of House Lannister of Casterly Rock, and father to twins Cersei and Jaime, and Tyrion. Tywin was the Warden of the West and the Lord Paramount of the Westerlands, the wealthiest region of the Seven Kingdoms, and was twice the Hand of the King, making him one of the most powerful political figures in Westerosi history.

Tywin married his first cousin Joanna. When she died giving birth to their dwarf son Tyrion, it is said that “the best part of Tywin died with her”. He never remarried.

Which personality type was Tywin Lannister?

Tywin Lannister was an unhealthy ENTJ personality type. He was determined to get what he wanted and would step over anyone who got in his way.

Healthy ENTJs aim to achieve their goals in an ethical way, but for unhealthy ENTJs, morals go out of the window. Tywin was controlling and bossy, using people as pawns with no regard for them as humans or their emotions.

Tywin was manipulative and forced people to listen to his opinions. Healthy ENTJs are able to read a room, but as an unhealthy ENTJ, Tywin lacked self-awareness. He came across as domineering and aggressive.

Tywin was unforgiving and dismissed emotions, be it his own or other people’s. Lacking tact, he was overly direct, often upsetting those he comes into contact with.

As an ENTJ personality type, Tywin Lannister’s best matches were INFP and INTP.

Tywin Lannister was probably a Scorpio zodiac sign, which belongs to the Water element of astrology, along with Pisces and Cancer. The symbol of Scorpio is a scorpion, which represents intensity.

As a Scorpio zodiac sign, Tywin was full of passion and embraced challenges in all areas of his life. This fire could be taken to the extreme though and he could become angry or hostile when he didn’t get what he wanted. People of the Scorpio zodiac sign can also be manipulative.

Which Enneagram type was Tywin Lannister?

Tywin Lannister was an unhealthy Enneagram Eight personality type with a Nine wing. Enneagram Eights belong to the body centre, along with Nines and Ones, and they naturally make decisions based on gut instinct.

Tywin liked to feel in control, particularly of his physical environment. For Enneagram Eights, freedom and independence are important.

As an Enneagram Eight, Tywin was bold, direct and assertive. However, he took these traits to the extreme and came across as domineering. Unhealthy Enneagram Eights tend to be confrontational for the sake of it, as well as purposefully intimidating. Tywin had a ruthless streak and a strong desire for complete control.

“A lion doesn’t concern itself with the opinion of sheep.”

“When soldiers lack discipline, the fault lies with their lord commander.”