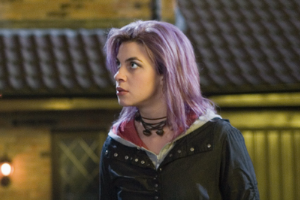 We explore Nymphadora Tonks’ personality type, best personality matches, zodiac sign and Enneagram type. Nymphadora Tonks was a fictional character from Harry Potter who was a half-blood witch and a Metamorphmagus. She attended Hogwarts School of Witchcraft and Wizardry from 1984 to 1991 and was sorted into Hufflepuff House. After leaving Hogwarts, Tonks joined the Ministry of Magic and trained to become an Auror under the watchful eye of Alastor Moody. She then joined the second Order of the Phoenix, working undercover in the Ministry and helping to guard the Department of Mysteries. She fought in the Battle of Hogwarts and was murdered by Bellatrix Lestrange, her maternal Aunt. Her murder was avenged by her colleague and friend Molly Weasley.

Which personality type was Nymphadora Tonks?

Nymphadora Tonks was an ENFP personality type. Warm and outgoing, she had an active social life, but she had a deeper side too that wasn’t always obvious at first. As an ENFP, Nymphadora was a unique mixture of being people-oriented but also introspective. Meaningful connections played a big part in her life and she was deeply loyal, which makes her a valued friend, colleague and family member.

Nymphadora disliked routine and preferred to focus on the future. Typically ENFPs are great at generating new ideas but they sometimes delay important tasks until the last minute. Dreaming up original concepts but not seeing them through to the end is an issue that ENFPs like Nymphadora sometimes face. Nymphadora was certainly original and enthusiastic.

As an ENFP personality type, Nymphadora Tonks’ best matches are INTJ and INFJ. On So Syncd, these personality matches are considered ‘golden pairs’ because they have just the right amount of similarities to understand each other and just the right amount of differences to create that spark. Read our blog post to learn more about ENFP compatibility.

Nymphadora Tonks was probably a Pisces zodiac sign, which belongs to the Water element of astrology, along with Cancer and Scorpio. The symbol of Pisces is two fish swimming in different directions, which represents complexity.

As a Pisces zodiac sign, Nymphadora was empathetic by nature. She naturally took on the role of a listening ear and was highly in tune with the emotions of others. Typically people of the Pisces zodiac sign will immediately want to help if they see someone who is upset or in pain.

Which Enneagram type was Nymphadora Tonks?

Nymphadora was an Enneagram Seven personality type with a Six wing. Enneagram Sevens belong to the head centre, along with Fives and Sixes, and they naturally make decisions based on analysis. Nymphadora sought to understand before she proceeded. Enneagram Sevens value connecting with others on an intellectual level and they like to feel in control.

As an Enneagram Seven, Nymphadora was adaptable, curious and optimistic. She had an enthusiastic and forward-looking approach to life. Enneagram Sevens are often generalists who are able to learn quickly and have a wide range of skills. Articulate and intelligent, Nymphadora came across as well-read and resourceful.

“My Head of House said I lacked certain necessary qualities…like the ability to behave myself.”

“Ah well…wand still in your jeans? Both buttocks still on? Okay, let’s go.”