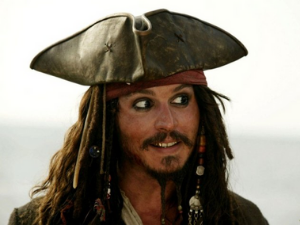 He is a legendary pirate of the Seven Seas, and the irreverent trickster of the Caribbean. A captain of equally dubious morality and sobriety, Jack fought a constant and losing battle with his own best tendencies.

Jack’s first love is the sea and his second is his beloved ship the Black Pearl. As a young pirate, he earned the name Jack Sparrow when he trapped the notorious Spanish pirate hunter Capitán Salazar in the Devil’s Triangle.

Jack Sparrow embarked on many adventures with William Turner Jr. and Elizabeth Swan, such as searching for the Shadow Gold and the treasure of Isla de Muerta.

Captain Jack Sparrow is an ENTP personality type. He loves a mental sparring session with someone who can challenge him.

ENTPs enjoy playing devil’s advocate, partly because it gives them the opportunity to showcase their quick wit and partly because it helps them to clarify their thoughts. Jack is certainly one to think out loud and he isn’t afraid to speak his mind or share his opinions.

Jack is naturally curious and has a knack for coming up with completely new ways of doing things. However, ENTPs tend to be ‘ideas people’ rather than the type who then goes on to work out the mechanics of how to implement something.

Jack is charismatic and people are drawn to his confidence. However, people of this personality type can sometimes be overly direct in the way they communicate.

Captain Jack Sparrow is a probably Sagittarius zodiac sign, which belongs to the Fire element of astrology, along with Aries and Leo. The symbol of Sagittarius is an archer pointing his bow to the sky, which represents freedom and liberation.

Captain Jack Sparrow is an Enneagram Seven personality type with an Eight wing. Enneagram Sevens belong to the head centre, along with Fives and Sixes, and they naturally make decisions based on analysis.

Jack seeks to understand before he proceeds. Enneagram Sevens value connecting with others on an intellectual level and they like to feel in control.

As an Enneagram Seven, Jack is spontaneous, curious and enthusiastic. He has an optimistic and forward-looking nature.

Enneagram Sevens value novelty and they want to experience everything that life has to offer. As a natural explorer, Jack loves to learn about all kinds of topics and he seeks new experiences.

“I regret nothing ever.”

“Gentlemen, m’lady…you will always remember this as the day that you almost caught Captain Jack Sparrow!”

“I’m dishonest, and a dishonest man you can always trust to be dishonest. Honestly. It’s the honest ones you want to watch out for, because you can never predict when they’re going to do something incredibly … stupid.”