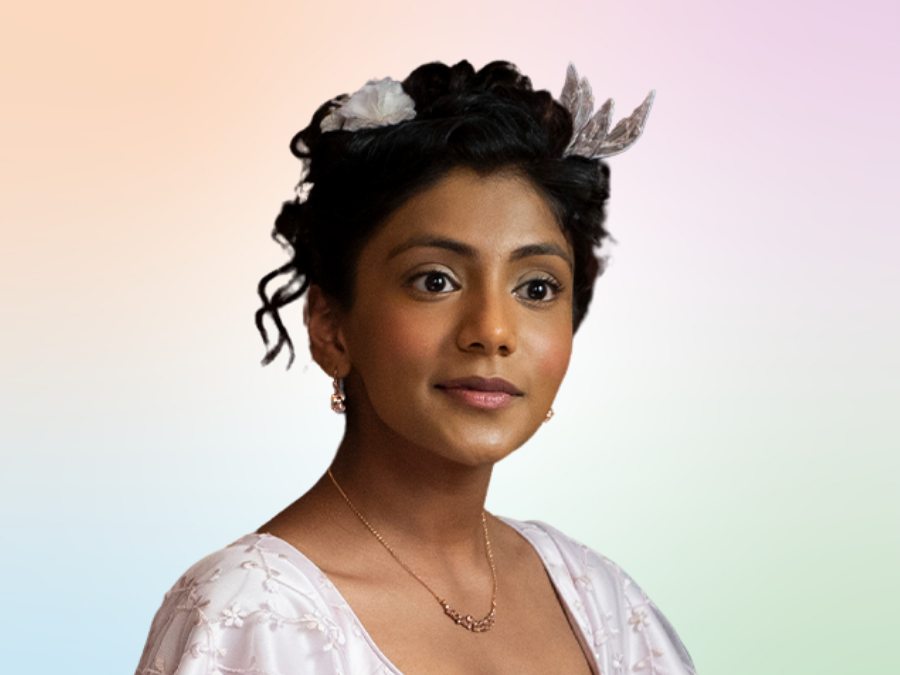 Edwina Sharma has been taught by her older sister Kate Sharma to be the perfect debutante. She’s kind-natured and endlessly endearing.

While she may be young and naive, she goes after what she wants. Edwina is equal parts sweet and lovely but still knows that she wants a true love match.

Edwina finds herself inundated with suitors and thankfully she has her loyal and shrewd sister to vet the potential matches. But when Edwina falls for Anthony Bridgerton against Kate’s wishes, their sisterly bond is put to the test.

Which personality type is Edwina Sharma?

Edwina Sharma is an ENFP personality type. She thrives in worlds of ideas and she values meaningful connections. Fortunately, people love to be around her because of her outgoing and warm attitude.

Edwina is a unique mixture of sociable yet introspective, always looking for deeper meanings and questioning concepts that others might not think to question.

Edwina is an expressive communicator, using her wit to create engaging stories. Curious and original, she has an artistic side. ENFPs are typically drawn to creative pursuits because it allows them to express their ideas.

Edwina places great importance on personal freedom and self-expression. Plus, she can’t stand feeling tied down or living a life that isn’t in alignment with her values.

As an ENFP personality type, Edwina Sharma’s best matches are INTJ and INFJ.

Edwina Sharma is probably a Pisces zodiac sign, which belongs to the Water element of astrology, along with Cancer and Scorpio. The symbol of Pisces is two fish swimming in different directions, which represents complexity.

As a Pisces zodiac sign, Edwina is empathetic by nature. She naturally takes on the role of a listening ear and is highly in tune with the emotions of others. Typically people of the Pisces zodiac sign will immediately want to help if they see someone who is upset or in pain.

Which Enneagram type is Edwina Sharma?

Edwina Sharma is an Enneagram Six personality type with a Seven wing. Enneagram Sixes belong to the head center, along with Fives and Sevens, and they naturally make decisions based on analysis.

Edwina seeks to understand before she proceeds. Enneagram Sixes value connecting with others on an intellectual level and they like to feel in control.

As an Enneagram Six, Edwina is innovative, perceptive, and responsible. She has a special talent for foreseeing problems due to her strategic nature.

“Can you really not see anything engaging about him?”

“What’s the first thing you notice when a man proposes to you?”